Carleen Cullen is co-founder and executive director of Cool the Earth, a 501(c)3 corporation headquartered in Marin County, California. Ms. Cullen received the prestigious Jefferson Award for Public Service, and is a recognized expert on the transition to electric vehicle (EV) transportation. She has served on nonprofit boards and government advisory committees, was a panelist on the California Energy Commissions Workshop on EV Charging Reliabilty as well as the BECC conference convened by the American Council for an Energy-Efficient Economy, California Institute for Energy and Environment within the Center for Information Technology Research in the Interest of Society at U.C. Berkeley, and the Environmental and Energy Policy Analysis Center at Stanford University. She has appeared appeared as a featured speaker on Climate One, a program of the Commonwealth Club, among other media and conference appearances. Ms. Cullen served as transportation advisor to then governor-elect Gavin Newsom. She lives in Marin County with her husband Jeff, with whom she co-founded Cool the Earth. They are proud parents of two adult humans and doting parents to rescue dog Pip.

Cool the Earth was founded in 2007. It continues to inspire personal action to fight climate change, reaching more than 500,000 people worldwide. The Cool the Earth community has engaged in 323,000 carbon-saving actions in 31 states and 5 countries. Koda the Polar Bear™, a creation of Ms. Cullen, has appeared in standalone books, video games, as well as English- and Spanish-language animated cartoons.

In 2019, Ms. Cullen formed Drive Clean Bay Area, now Ride and Drive Clean, a national nonprofit collaboration of organizations, agencies, cities, and businesses with a goal of greatly reducing carbon emissions by advancing the adoption of electric vehicles. Through scalable community engagement programs, Ride and Drive Clean inspires people to replace internal combustion vehicles with electric vehicles, e-bikes, and other forms of zero-carbon transportation. Ms. Cullen holds a certificate in community-based social marketing and all programming is data-driven and has multiple touch points for efficient and effective change to clean technologies. 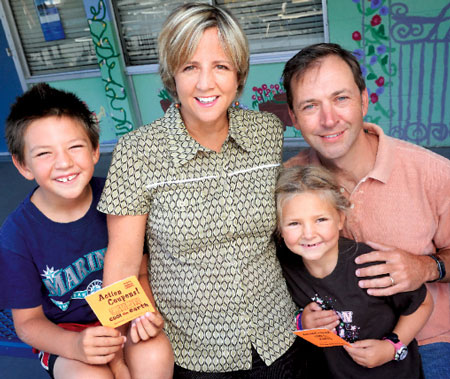 Ride and Drive Clean offers a host of programs, including educational webinars that include topics on the basics of driving electric and more in-depth programs on incentives for low-income communities, how to charge on the road and/or at an apartment or condo.  The collaboration offers in-person car shows and test drive events that also have a focus on e-bikes for transportation. Ms. Cullen asserts that her e-bike is her favorite form of transportation.

“Why We Started Cool the Earth.”

For more about the founding of Cool the Earth, watch this short video here or find it on our YouTube channel here.